Continuing the initiative of giving servicemen and women a formal “Welcome Home” from the Villages of Vernon Hills and Libertyville, two additional service members were honored at the Village Board Meeting on Tuesday, January 22, 2008.

This ceremony was similar to the first such greeting in December 2007. Two residents, USMC Lance Corporal Kevin Kohout and US Army Sergeant Joe Morales, had both been deployed overseas and had since returned. The Vernon Hills Village Board presented each with a proclamation and gift certificates to area restaurants. In addition, both Kohout and Morales were escorted from their residences to the Village Hall in a limousine with a police and fire escort.

“This program didn’t exist when these two young men came home,” said Vernon Hills Police Chief Mark Fleischhauer. “We felt they deserved all the recognition and thanks we would give any service member coming straight out of the battle zone.”

We are very proud of both Kevin and Joe. 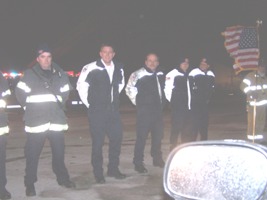