On Sunday, October 19, 2008, USMC Lance Corporal Dmitriy Ostrovskiy arrived back home in VH in style. After a lengthy flight delay, Dmitriy was picked up at O'Hare by a limousine and escorted through the Village by the VHPD, Lincolnshire/Riverwoods Fire Department, and the Countryside Rural Fire Protection District. Only a few family members braved the delay and greeted Dmitriy outside his home around midnight, but his fiancé Amy Aschermann was faithfully there the whole time. In fact, she was waiting in the limo as a special surprise to Dmitriy as he got off the plane!

On Tuesday, October 21st, VHPD members picked up Dmitriy and escorted him through town to the Village Hall, where Dmitriy was recognized by Mayor Roger Bryne and the Village Board for his service to the US.

Dmitriy was a graduate of the Vernon Hills High School in 2006, after which he joined the Marines Corps. He came home for a special occasion: he and Amy are getting married on Saturday, October 25th. Welcome home Dmitriy and best wishes to you and Amy! 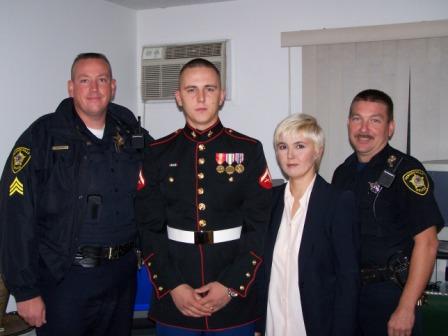