The next time you see a police officer sitting in a squad on the side of the road and it looks like he/she is using binoculars to bird watch, you had better watch your speed. The officer is probably checking for speeders. We thought you might find it interesting.

At one time or another, almost every driver will receive a speeding ticket. For almost all violations, the speed of the vehicle is determined through the use of a device typically referred to as a "radar gun". For the past 10-15 years or so, police have also used laser-based devices to detect speed. Although the term "radar" is often used in conversation, laser detection uses different technology than radar. Simply explained, radar uses the Doppler effect (or Doppler shift) to determine speed, while laser uses time-of-flight pulses. A Lidar (light and radar) gun is a commonly used tool in law enforcement. 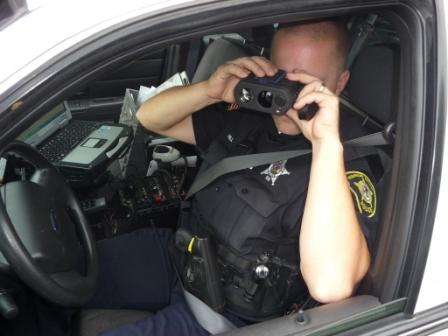 eliminates the often heard argument "you have the wrong car". The reason for this is that the officer using the laser unit looks closely into the device and can see exactly which vehicle the laser is striking.

Not too long ago the Vernon Hills Police Department was awarded a new Lidar speed gun from the Illinois Department of Transportation. Speed detection devices were awarded to many agencies throughout the State that participated in Independence Day traffic safety campaigns.

A nice thing about the new unit is it's size. At roughly the size of small binoculars, it is less cumbersome than other devices. (Officer Dan Hill is pictured here using the device.)

Although it is nice to have, the Lidar unit (and for that matter, all hand held speed detection units in general) is not the only way that we monitor speed. We also use a device called Stealth Stat to conduct speed studies in the community.