February, 2017 - It's hard to believe it has been a year today since we lost our friend and coworker, Officer Andrew Rheintgen #17.

On Friday, February 17, at a two-part ceremony at the station and in Deerpath Park, Andy's wife Susan, daughter Emily, other family members, coworkers, friends, Village officials and many others gathered to remember him.

Thanks to the Vermon Hills Park District, a tree was dedicated in Andy's honor in Deerpath Park. After some touching words by Andy's friend, Commander Pat Zimmerman, AR17 balloons were released into the beautiful blue sky as a sign of everyone's friendship and love to Andy and his family. (Look close at the video below and, in addition to the blue balloons, you will see a "1" and a "7" in honor of Andy's badge number.)

Prior to heading to the park, the guests had an opportunity to view Andy's shadowbox that hangs proudly in the hall at VHPD. It's displayed next to the shadowbox of Officer Jesse Goldsmith, who passed away in 2008.

Watch for the tree the next time you're in Deerpath Park. It's about 20 feet off the bike path just south of playground at the north end of the park (Warrington Rd. entrance).

We still miss you Andy! May you continue to Rest In Peace. 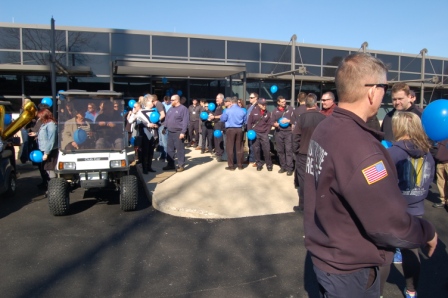