That's all we can say about the 2021 Toys For Tots drive. Wow. That and, of course, thank you.

Between the toys that were dropped off at the Police Department, Village Hall and Public Works facility, as well as toys that were donated by a local business, we estimate that we collected enough toys to fill about 24 of the official Toys For Tots boxes. The entire collection is pictured below.

Thank you to everyone who took the time and effort (and expense) to drop something off. The community support and generosity for this endeavor is amazing and heart warming. You have brightened the holidays for hundreds of children.

Over its lifespan, the Marine Toys for Tots Foundation has distributed more than 566 million toys to more than 258 million less fortunate children. 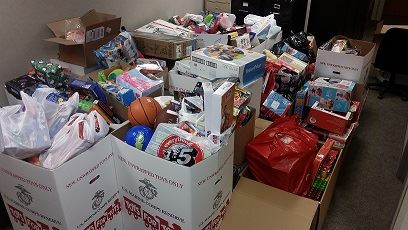 The History of Toys for Tots

Toys For Tots began in 1947, when Major Bill Hendricks, USMCR and a group of Marine Reservists in Los Angeles and distributed 5,000 toys to needy children. The idea came from Bill’s wife, Diane. In the fall of 1947, Diane crafted a homemade doll and asked Bill to deliver the doll to an organization, which would give it to a needy child at Christmas. When Bill determined that no agency existed, Diane told Bill that he should start one. He did. The 1947 pilot project was so successful that the Marine Corps adopted Toys for Tots in 1948 and expanded it into a nationwide campaign.

The initial objective that remains the hallmark of the program today is to “bring the joy of Christmas to America’s needy children”.

From Christmas 1980 through the present, Marines have collected and distributed only new toys. Three factors dictated this change. First, the Secretary of Defense’s Total Force Program, introduced in the 1970’s, assigned Reserves a greater role in America’s defense posture. As a consequence, Reservists had to dedicate every minute of weekend drill time to honing and polishing combat skills. No time was available to refurbish toys. Second, public awareness of the health and safety aspects of toys that developed during the ‘70s made distribution of used toys legally inadvisable. Third, distributing “hand me down” toys does not send the message Marines want to send to needy children. The goal is to deliver a message of hope, which will assist in building self-esteem and, in turn, motivate less fortunate children to grow into responsible, productive, patriotic citizens and community leaders. A shiny new toy is the best means of accomplishing this goal.

Over its lifespan, the Marine Toys for Tots Foundation has distributed more than 566 million toys to more than 258 million less fortunate children.